Is women’s soccer in Italy finally on the move, or just more talk?

Home » Featured » Is women’s soccer in Italy finally on the move, or just more talk? 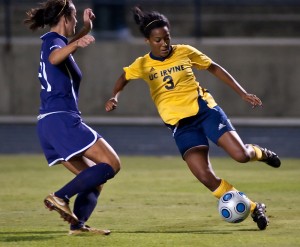 An important press conference regarding women and sports took place last week on the outskirts of Rome at the conclusion of a three-day national team training camp organized by head coach Carolina Morace. The central theme of the conference, which was presented by officials of the Italian Ministry for Equal Opportunity and the Italian Female Soccer Division, was how to give more attention to women’s sports in Italy.

The conference revolved around the “azzurri” national team that represents for many the “jewel” of women’s sports in Italy (or at least it should be). The purpose of holding such a conference was to also see how the Italian FA, represented by the I.F.S.D. together with the Ministry, could further promote the issue of women who participate in sports. Women athletes in Italian society have made considerable steps forward but still struggle to find a larger niche in the Italian media which more often than not has its eyes centered on men’s sports, in particular soccer, Italy’s No. 1 sport.

One of the objectives of the Ministry is to give more attention to younger women who play sports. According to the Ministry, more and more women are not only playing sports but they also take in men’s soccer games. While these signs may be positive, the negative side is that there are still fewer women who are in high-level managerial positions, both in the work force and in the world of sports. The Ministry’s role is therefore to be a sort of liaison between institutions and female sports in order to bring more attention to female athletes. Female sports in Italy still lag behind other European countries like Sweden, Finland and Norway. These countries, together with the States, are many years ahead of Italy vis-à-vis the development of female sports.

The I.F.S.D.’s president Natalina Ceraso Levati stated that when she became president back in 1997 there was only the A National Team. Since then, other teams have been created, not to mention the U-21 National Team under the aegis of UEFA which has worked closely with both the Italian FA and its female division. Ministry officials are also convinced that the increased presence of women in Italy’s stadia could have a “calming” effect on the unfortunate rise in stadium violence. No one necessarily believes that women are better than men but women do perhaps have a different outlook on life, including how sporting events should be viewed. Their presence could perhaps lead one day to violence disappearing from the world of sports.

Carolina Morace appeared enthusiastic of the proposals, as her national team will be facing Spain on November 28th. for an all-important qualifying match for the 2003 World Cup event. At the present moment, Italy’s qualification is an uphill battle. For Morace, the recent European championship in Germany was positive for her national team because there was more exposure from the media, even though once Italy was eliminated from the event by France the media attention plummeted quickly.

On another positive note for women’s international soccer, Italy’s Gazzetta dello Sport newspaper published the other day an interesting six page article in its weekly SportWeek magazine on the qualification of the Chinese men’s national team to the 2002 World Cup in Japan/S.Korea. Up until and after China’s qualification few journalists mentioned the fact that China already has a rather successful national team in its women, nor that China was the first nation in the world to have successfully organized FIFA’s very first official World Cup back in 1991. The article exalted the work of the “gypsy” himself, head coach Bora Milutinovic, no doubt a familiar face to many Americans (h’s referred to a gypsy by the Italian press because he has in 15 years coached five different national teams. Milutinovic is so much on the move from continent to continent that someone suspects that Franz Beckenbauer may even want him to be Germany’s head coach in 2006 seeing that the Germans lately have not exactly been winning over crowds with their style of play). The article concludes on a positive note for the women’s game as it renders homage to what the magazine calls the “20th century’s Maradona in a skirt”, China and Atlanta’s very own Sun Wen.

(WSW has corrected some factual errors in the following article quoted)

“Played by more than 15 million women in the world, Chinese female soccer has almost a superior appeal to it than the men’s game. In a traditionally communist society, women have always had an important role in society equal almost to that of men. The 1999 World Cup final in Pasadena for example was between the U.S. and China. It was won on a penalty kick shootout by the Americans but 28 year-old Sun Wen, the best scorer of that event, was later also co-awarded (with Michelle Akers) in December, 2000 with FIFA’s title of best female soccer player of the 20th century. Sun Wen, who later moved to the States to play for the WUSA’s Atlanta Beat, is a minute woman from Shanghai who has a degree in literature. She is adored by the masses in her country and is about as famous as France’s Zinedine Zidane is in the world. She enjoys writing poetry, playing instruments, singing and working as a TV. Host on talk shows. China, which will be organizing the next Women’s World Cup in 2003, has a women’s championship that is identical to that of the men’s (1st and 2nd division with 12 teams each). Many of the female players are semi-pro who are either employed with clubs, with companies that sponsor them or with universities. Games take place on the same fields where the men play. Spectator turnout in Beijing can average as high as 10,000 people per game. The Chinese press has quite often used the triumphs of the women’s national team in order to give an image of China as a superpower of world soccer. The efforts of Sun Wen and her team-mates has to a certain degree helped pave the way for the growth of Milutinovic’s national team.”