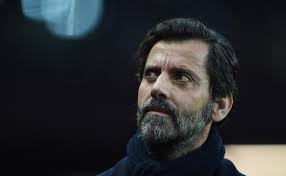 Coach for the Watford’s, Quique Sanchez Flores was happy with the performance of the team at the FA semi cup finals. He however, did not comment on his future with the club.

The coach was faced with questions, as reports suggested that his contract would not be renewed after the end of this season.

Though he was not pleased with not being able to lead the team to a more stable season end, the coach was very positive of the team’s progress over 2015 – 2016.

Flores told BBC sport  “I am pleased with the performance,”

“It was difficult to play Palace who defend with an English style and have pace and power. It was hard to concede the first goal.

“It took some time to recover. We came back and in the second half we matched Palace.

“In this moment, I feel we had the chance to win the match. The most important thing is that we are competitive in the semi-final.”

Flores future has been a topic much talked about prior to the match. He thinks that the season will be a favourable one, with him coaching the team or not.

“We have a lot of reasons to be happy this season. The main target was to stay in the Premier League,” he said.

“In the future when we look at the history of Watford we will see how important this season was for the club.”